In considering Nat Cassidy’s absorbing new play, The Temple, or, Lebensraum, we would do well to first consider the many functions and responsibilities of adaptation.

Cassidy’s play takes many elements from an H.P. Lovecraft short story from the 1920s called The Temple; though I think to say it is “inspired by” the story as Cassidy does in the playbill is indeed a more fair assessment than to say it is “based on” that story. I realize that might seem like a trivial distinction to make, but I feel it is crucial in fairly evaluating the success on this play. To me, “based on” gives the impression that the material will be adapted from one medium to the next as precisely as the new medium will allow. “Inspired by” means that there were a handful of elements, characters, or themes in the original work that resonated with the adaptor and will thus be respectfully incorporated into what essentially amounts to a wholly new work.

Anyway, my highfalutin ideals about adaptation notwithstanding, what does ABSOLUTELY make sense are Cassidy’s captivating staging and reinvention, as well as the shipshape production design. Sandy Yaklin has outdone herself with the scenic design, transforming the Brick Theater into not only a convincingly dingy submarine but also a fully functionally theater in the round. Likewise, the muted echoes of Jeanne Travis’ perfectly timed sound design do a lot to reinforce the sense of claustrophobia. To whatever degree Cassidy and his top-notch team have taken inspiration from the original story, they have translated the story’s scant 5000 or so words into a full-length, fully immersive experience. Like the characters in the play, you are completely submerged in the events of the play, and when The Temple, or, Lebensraum wants to it strikes its audience like a perfectly aimed torpedo. It’s one of those rare creatures of indie theater where the production, the performances, the material, and the design tangle their tentacles together into a monstrously entertaining whole.

In addition to fast-forwarding the events of Lovecraft’s story to the World War 2 era, Cassidy’s telling also shuffles the characters a little. (If need be, you can check out my summary of the story and pre-game analysis here.) Oberführer Karl Heinrich (played by Matthew Trumbull) is no longer the commander of the ship, but a Nazi propagandist who has been – to use a more modern term – embedded with the crew of a German Navy u-boat to oversee the documentation of their victories over the British. Obviously that line about the “fine reel of film” from the story registered with Cassidy as much as it did with me. Tod Klenze (played by Arthur Aulisi) who in the story is Heinrich’s second in command, here is the salty Kommandant of the ship. Cassidy makes a point to note in the playbill that members of the Nazi party were actually not allowed to serve as crew on u-boats, and indeed much of the tension between Heinrich and the crew stems from that idea. 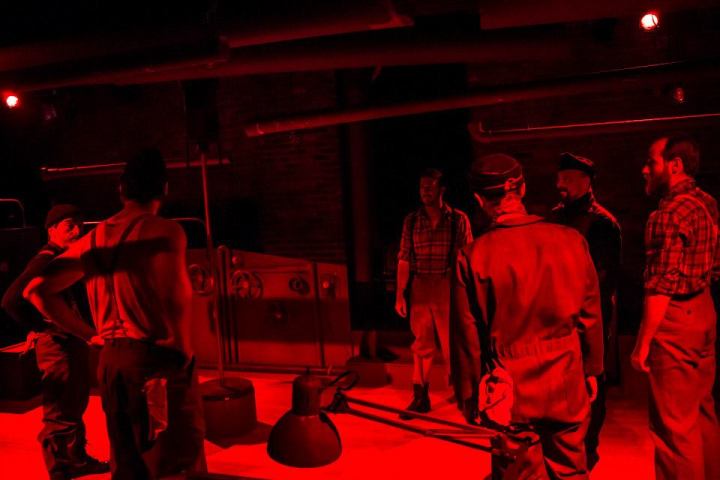 But there is another wrinkle to this – the “story” of the play is told by the long dead ghosts of the crew members of the u-boat, trapped in a kind of endless Purgatory where they must relive their horrific demise over and over. Lighting designer Morgan Zipf-Meister’s (whose work is stellar throughout)b uses a distinct wash of light to effectively differentiate these scenes from the proper scenes of the play. This clever convention – effectively a Greek Chorus – allows Cassidy some wiggle room in with the limited physics of the submarine and, more importantly, the ability to inject a little levity into the proceedings. The ghosts of the crew have gone goofy in the constant retelling of their fate and even go as far as framing the entire story as a joke: “A monster walks onto a u-boat.” 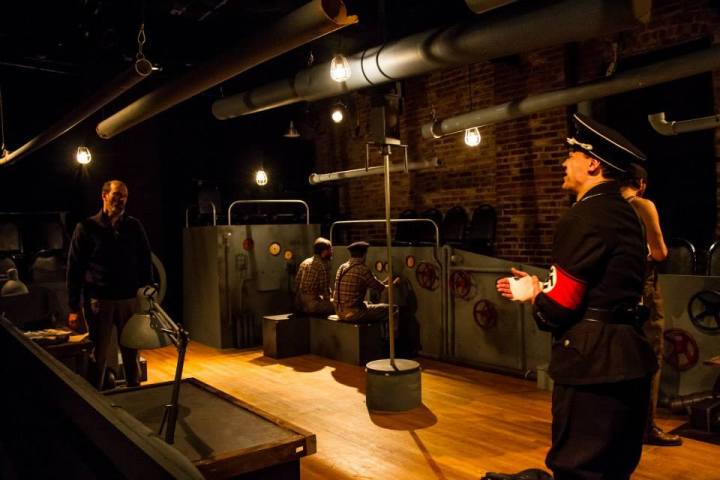 They are, of course, talking about Heinrich. And what a singular monster he is in the hands of an actor like Mr. Trumbull. Affable, a little ditzy, and sometimes downright giddy, Heinrich rarely seems mean while he stages what ultimately amounts to a mutiny to wrestle control of the ship from Klenze, but Trumbull’s every action pulses with deeply passive aggressive sadism. He has come on this boat for blood. Later, we will learn that his has a larger motivation that takes into account broad perspective of 20th century history that no mortal German man could have had back in the 1940s. We will witness his wounds healing at a preternatural speed; we will see him NOT suffering from the lack of oxygen that is killing the rest of the crew. It’s strange stuff, but Trumbull sells the hell out of it. Heinrich clearly has some conduit to an immense power that wants him to accomplish his horrific goals. Perhaps it is the two ancient sculptures he keeps fidgeting with? Or could it be that over decades of retelling the tale, the ghosts of the crew have gradually evolved the Oberführer into the monster they all believe him to be?

But then again, maybe he’s not the monster the crew is talking about. Maybe it’s the Stowaway, a tongue-less bedraggled woman played by Adriana Jones. In this version, she is the one found clinging to the hull of the sub with two mysterious sculptures in her pockets. She’s a welcome invention on Cassidy’s part, both for the feminine energy she adds to Lovecraft’s bratwurst-fest and for what she is meant to represent. The way the long tendrils of hair dangle in front of her face, the blood-curdling inhuman groans. I didn’t kid myself that there would be some giant Cthulhu puppet in this production, but I was happy to see the great one represented in some capacity.

The first act handles the setup of all this information masterfully and quickly establishes the status quo. Soon enough, the u-boat is nailed by the British and begins to sink. The status quo degenerates. The second act starts strong, with a chilling scene of the core crew deciding to kill the trapped and suffering crewmen whose screams we hear from offstage. Tristan Colton, Eric Gilde, John Blaylock, and Zac Hoogendyk are all terrific in this segment, which Cassidy has effectively staged as a stylized call and response.

The majority of act two is one long scene, in which the crew, waiting for salvation that Heinrich has promised them, lies around trying to conserve the steadily depleting oxygen. It’s an incredibly brave and patient scene that will eventually lead the crewmen to their grisly ends. Because of its length, it’s also where the air goes out of the play a little. Cassidy zigs and zags between this guy’s backstory, this guy’s politics, this guy’s hometown, and these guys are spies; ultimately the seams of this otherwise well-woven story begin to show. Like Heinrich’s search for a joke to go with his oft-repeated punchline – “No soap. Radio.” – Cassidy seems to be search for the perfect setup that will ultimately lead Heinrich out of the ship, towards the sunken city and the temple of the title.

That that final underwater scene takes place in a kind of heightened, metaphorical setting didn’t bother me, but I did feel that one key component was missing overall from the adaptation: madness. In Lovecraft’s story, the crew is haunted by visions of dead men through the portholes and terrible nightmares. They are slowly driven to insanity as they approach the underwater city. In Cassidy’s version, madness has been largely replaced by desperation and oxygen depletion. Within the context of the play it certainly works, but it is a total shift from what Lovecraft’s story was about, which brings me back to that point about adaptation.

I myself usually find a model like this – where the original work is only a small facet of the new one – to be more interesting, but even so I am usually a little vexed by it. On the one hand, I think if you are only borrowing elements from existing material to serve the purposes of your own new story, why adapt at all? Why not just genericize the elements you like from the source material and then just do your own thing? On the other hand, who the hell am I to talk? I am the guy who has spent more than a few years trying to get a play about Stanley Kubrick that ends with a two page bibliography off the ground. Explicit connection to a source material helps. It helps the artist implicitly say, “Hey, this other artist and I are on the same page.” Or, “Hey, I like what this person has to say and it’s worth your hearing it too.” Or even, “Hey, I did my goddamn homework here, so leave me alone about it on Twitter.” (I’m looking at Aaron Sorkin with that last one.) It is also an appropriate and important way of honoring someone whose previous hard work you will be directly benefiting from.

I suppose the thing I have to remember at the end of the day is that ultimately this production is not about H.P. Lovecraft’s The Temple; it’s about Nat Cassidy’s The Temple, or, Lebensraum, which regardless of any nitpicks I might have had is a genuinely magnificent piece of theater. Watching a talented artist like Cassidy deconstruct and then reconstruct the source code of Lovecraft’s story and style is a helluva thing to see. The show only has two more performances as of the time of this posting. Do your best to see it now or suffer the wrath of the elder gods, puny mortals.

The Temple, or Lebensraum is playing at The Brick Theater in Williamsburg through February 28th. Tickets are not really available at Ovation Tix anymore — most likely you should just go and try to purchase at the door. The script of the play is published at Indie Theater Now.