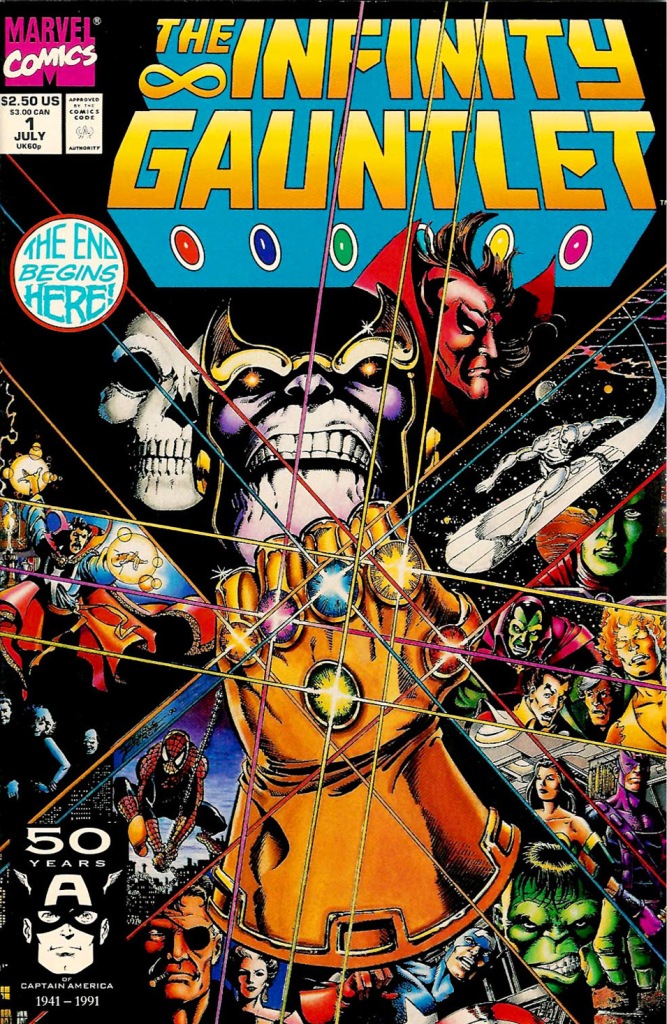 For years I’ve been meaning to do a kind of omnibus companion to my very favorite Marvel comic series, The Infinity Gauntlet. Now that the Marvel movies have got Josh Brolin running around as Thanos, a hand full of infinity stones in the mix, and two Avengers: Infinity War movies on the horizon, I figure I better do this thing now before somebody else does.

My eventual goal is to do an issue-by-issue commentary that will be steered by the comics themselves, but will of course also branch out into information about the creators, the characters’ histories, my own experience with the comics, the movies, and whatever else washes ashore. But before I begin that surely herculean effort, I want to do a series of shorter posts that will give a broad overview of what’s awesome about this this crazy little comic series. I will post a new piece each day this week.

So without further ado, here is the first of FIVE THINGS TO KEEP IN MIND WHILE YOU READ INFINITY GAUNTLET.

Jim Starlin, the writer of the Infinity Gauntlet series and creator of it’s main character, Thanos, seems to hate organized religion. Practically all of his major comic work turns on the idea of a corrupt religious institution or belief, whether it’s the Magus and the Church of Universal Truth in his old Warlock comics, the two warring religions in Dreadstar, or Thanos himself, who is defined by his zealous worship and adoration of the embodiment of Death.

Starlin has described himself as being deeply influenced by his Catholic upbringing; his heroes’ rejection of religion probably mirrors his own, while his villains deep-seated beliefs tend to cause nothing but trouble. Since Infinity Gauntlet bumps up against the Celestials, Eternity, the Living Tribunal, and a lot of the other trippy Marvel cosmology established by artists like Steve Ditko and Jack Kirby, Starlin couldn’t resist adding his own atheistic wrinkle to the pre-history of the Marvel Universe.

In the Guardians of the Galaxy movie, Benicio Del Toro, as the Collector, alludes to this idea when he gives a nice history of what the infinity stones are and how they came to be:

Only according to the comics, there’s a little more to this story. The immediate precursor to Infinity Gauntlet is a two-issue miniseries called The Thanos Quest that shows how Thanos came to possess the six infinity gems (as they are called in the comics) that make up his Infinity Gauntlet. Spoiler: it’s mostly by killing dudes. At one point, one of these dudes, called The Runner, seemingly has Thanos on the ropes and demands that Thanos tell him what the gems are. Thanos recounts what he has learned about them from looking into the all-knowing Infinity Well. It’s a doozy of a story, so I am just going to drop in the two pertinent pages here: 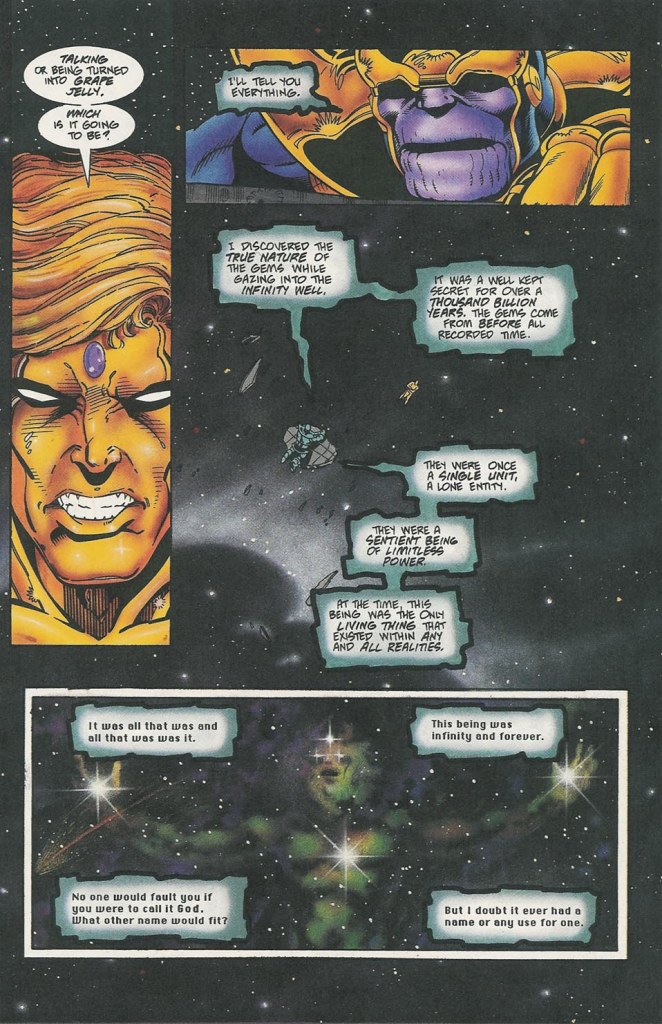 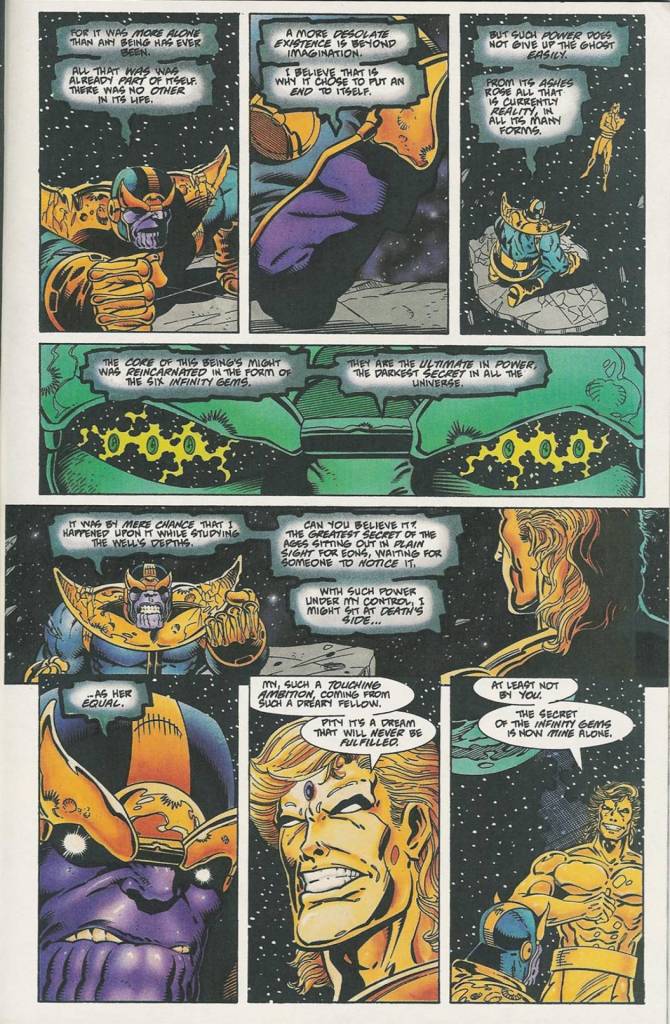 I want to be sure that what Thanos is saying here is crystal clear: the foreground for the Infinity Gauntlet is that God committed suicide and now the infinity gems are all that is left of him. That’s the fucking INCITING INCIDENT for this story. And the WHOLE Marvel Universe.

Guardians of the Galaxy is what they call a four-quadrant movie, meaning that it has to appeal to a broad swath of viewers – fans, kids, moms, girlfriends. This necessitates that Starlin’s unsettling and deeply brilliant concept about how the infinity gems came to be needs to be homogenized a little – though it’s important to note that the movie’s version does not outright refute Starlin’s version. It could be that the Collector simply doesn’t know the complete origin of the six singularities that fused into the stones or maybe that he just doesn’t want to harsh the Guardians’ mellow. Anyway.

I begin with this because I think it will give you a good level set as far as Starlin’s ideas about God and religion in a story that will mess around with the imagery and ideas of both. From a story perspective it also tells us something – there is Godly power out there in the form of the gems and currently no God is wielding it.

That ghost, as Thanos so folksily puts it, has been given up and the job is his for the taking.