On July 31, 2013 Dr. Geoff Klock and Mitch Montgomery met for a SPOILER-FILLED discussion about The Wolverine.  The meeting was convened atop a bullet train speeding through Japan at 300 miles per hour, but portions also took place in the arty dreamspace where life, death and giant fucking samurai robots converge.  These are the minutes of that discussion. 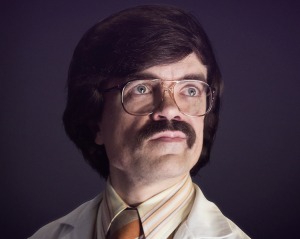 Before moving on to the official business of the meeting, it was determined that both Mr. Montgomery and Dr. Klock had viewed the Trask Industries website, which is a promotional site for the next X-Men movie after The Wolverine – X-Men: Days of Future Past.  Mr. Montgomery (who has already written about the site here) said he appreciated the drippingly euphemistic tone.  Testifying to the authenticity of one of the faux Trask videos on the site, Dr. Klock said he initially wondered if the video was just the youtube ad before the video. 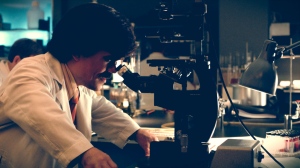 Dr. Klock reported that the casting of Peter Dinklage as Bolivar Trask in XMDFP was genius of several levels.  The first cited reason being that everybody fucking loves him.  The second being that – like the casting of Idris Elba as Heimdall in Thor – it asks a good question of why can’t Trask be a little person?  Mr. Montgomery agreed, and said he hoped the film would have the tact not remark on the fact that Dinklage is a little person, thus allowing it to inform only the subtext.  A motion was also made that the term “little person” sounded way worse than other ways of describing people of a smaller stature.  The motion carried.

Mr. Montgomery expressed concern over the continuity between the X-Men movies.  He pointed out that according to the Trask Industries website, Sentinels have been part of every president’s secret service since 1980.  If that is the case, he wondered where the hell the Sentinels were when the X-Men literally broke into the oval office in X2.  Dr. Klock suggested that the new movie would straighten it out.  When Mr. Montgomery continued to be a whiney fanboy about it and kept asking nit-picky questions that ultimately mean nothing when weighed against a fun movie, Dr. Klock rightly answered, “because time travel.” 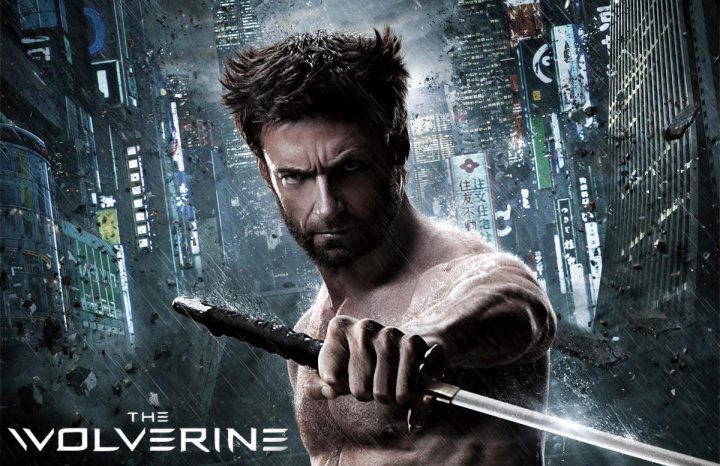 Moving on to the official business of the day, Dr. Klock admitted that he respected the effort The Wolverine made in not ignoring the events of the fucking terrible X-Men: The Last Stand.  Mr. Montgomery seconded this, saying that the Wolverine’s visions of the dead Jean Grey made for a nice device, where the Wolverine sees someone who used to mean something to him, but really it represents what he thinks about himself. He remarked to have the Wolverine give up the Jean Grey – that is to say, his longstanding love for her and his grief over her death at his hands – is an amazing thing to have in a X-Men movie.

Though he admitted he might be giving the movie too much credit, Dr. Klock thought the super sundrenched white arty dream space that Jean Grey walked into at the end might be a nod towards the “White Hot Room,” which is a special Phoenixy afterlife place established in Grant Morrison’s X-Men run.  Mr. Montgomery counted the Jean Grey sequences in The Wolverine among the many slights inflicted upon the character Cyclops in the X-Men movies.  He noted that Jean’s ghost says to Wolverine, “I’m all alone here,” despite the fact that her fiancée, Cyclops, died, like, a day before her.  Dr. Klock pointed out that from this remark it should be obvious that Cyclops went to Hell.

Mr. Montgomery summed up his opinion on the movie by saying he enjoyed the first two thirds immensely and found it very close to what he wanted from a Wolverine in Japan movie. He especially enjoyed the middle part where Wolverine was all fucked up and on the run with Mariko, almost like they were in the movie Chinatown or something.  Dr. Klock presented an article from Vulture Magazine, wherein Chris Claremont, who wrote the comic that the movie was partially based on, was interviewed and expressed disappointment with the end of the film.  Mr. Montgomery agreed with Claremont’s take on the movie.  Mr. Montgomery observed that the filmmakers had no restraint and simply couldn’t not have Wolverine fight a giant robot at the end.  That said, both agreed that this second Wolverine movie had a spectacularly low bar to clear after X-Men Origins: Wolverine. 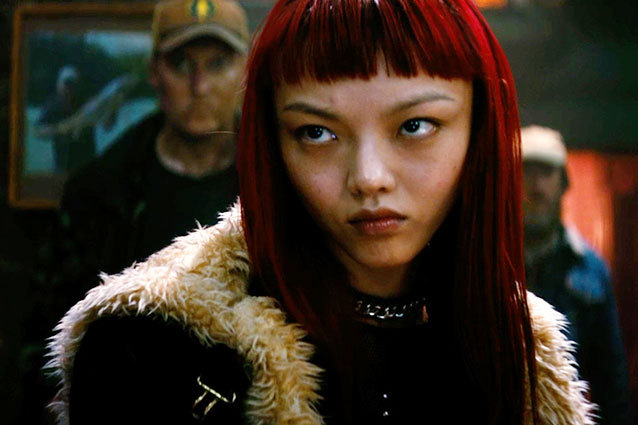 Both appreciated the casting in general and in particular the casting of Rila Fukushima as Yukio, citing the fact that she was not a teenybopper anime girl and her mesmerizing equilaterally triangular face as qualifying features.  Both also lauded the limited scope of the movie, which doesn’t end with something that will potentially end the world or the destruction of a city.  Mr. Montgomery pointed out, as other critics have, that The Wolverine upends that cliché by BEGINNING with the destruction of a city in flashback, when Logan saves Yahshida from the atomic bomb blast in Nagasaki.  Mr. Montgomery also advised that the ambiguity with Wolverine and Yukio on the airplane at the very end followed by the abrupt cut to black was totally killer.

Despite its overall lack of charm, Dr. Klock admired the movie’s handling of simple plot mechanics, like the bit about gripping a samurai sword with two hands that becomes important again later.  Mr. Montgomery agreed, adding that the opening flashback sequence did a nice job in reminding us that Wolverine’s claws were once made of bone, so that it wouldn’t seem to come out of nowhere at the end of the film.  Both agreed that Hugh Jackman clearly knows what he is doing as Wolverine, and also that he knows how to not wear a shirt appropriately.  Mr. Klock suggested that Mr. Jackman could teach the guys on True Blood a thing or two about the not wearing of shirts.

A quorum could not be reached on the bullet train action sequence.  Mr. Montgomery supported its originality and that it wasn’t just Wolverine fighting a girl Wolverine, while Dr. Klock felt it was too video gamey.  He elaborated that the sequence functioned on old-school Super Mario Brothers side-scrolling mechanics: The “player” has to keep fighting the guy while the beams are coming.  If the beam is up high, press down to duck.  If the beam is down low, press up to jump over it.  Dr. Klock said that he could practically see a controller with buttons.  Dr. Klock, clearly drawing upon the sophisticated critical vocabulary he learned at Oxford, concluded that the rudimentary mechanics and the obviously super computery graphics resulted in a sequence that just seemed fakey fakey fake.

Mr. Montgomery criticized the lack of coherent antagonists in the movie.  Essentially, attributes of the Silver Samurai character from the comics were divvied up into three characters, he said:  Mariko’s grandfather, her father, and her childhood boyfriend.  He wondered how interesting the movie might have been if her childhood boyfriend, Harada, had been the main villain Wolverine had to fight at the end.  Harada is clearly doing bad things throughout the movie but still has a legit point of view, in Mr. Montgomery’s opinion.  With Harada as the final villain, he posited, the ending battle wouldn’t have been as cut and dry as it ended up being with the snake tongue lady and the big samurai robot, who are both obvious one-dimensional villains.  Dr. Klock agreed and cited Film Crit Hulk, who likened the current trouble Hollywood writers are having concerning big problems and small problems. In the same way it is easier, according to Film Critic Hulk, to be concerned about your friend who is an alcoholic than it is for you to be concerned about a bigger problem like the homeless in New York, in movies contemporary filmmakers fail to connect audiences to the character personally and instead just pile on bigger and bigger stakes.   Dr. Klock said a giant Adamantium samurai is exactly the wrong way to get people invested.

Mr. Montgomery and Dr. Klock pointed to the ridiculous Frank Miller-inspired image of Wolverine with hundreds of arrows stuck in him and Wolverine’s smart black dress suit with a black tie as highlights of the film’s aesthetic.

Dr. Klock thought the movie got a lot of its Japanese influence secondhand from Kill Bill.  A good example, he said, was when Yukio clicked her sword into the holster and THEN everything dropped; The Wolverine sampled that from Kill Bill, which originally sampled it from Samurai Assassin.

Dr. Klock lamented the loss of Darren Aronofsky as a director, who initially helped develop this film, but dropped out before production.  His absence was particularly felt in the scene in which Wolverine performs open heart surgery on himself.  Body modification, Dr. Klock pointed out, centers all of Aronofsky’s movies, whether it is drug use, living forever, drilling a hole into your head, or turning into a crazy fucking swan.  Both agreed Aronofsky’s modis operandi would have lent itself to Wolverine amazingly and acknowledged a few places, like the drills going into the claws, where his influence might still be felt.  His aborted involvement also explains how bananas the ending is, Dr. Klock added.  Mr. Montgomery agreed, but was pleased that thanks to Aronofsky’s involvement surely what would have been another lame Wolverine movie at least turned out 50% interesting. 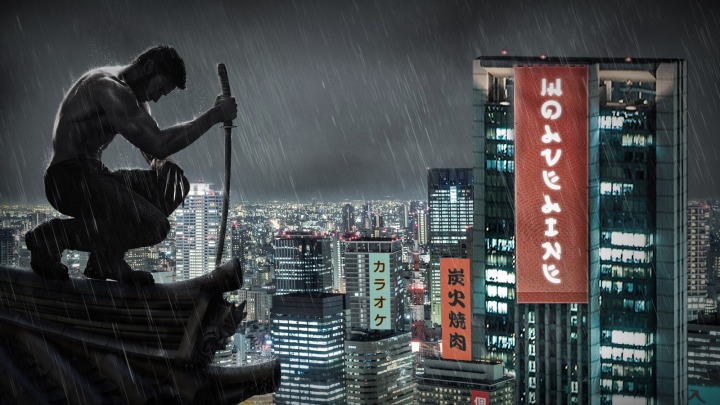 The conversation concluded with a discussion – inspired by the post-credits scene – of the current state of superhero movies.  Mr. Montgomery liked that The Wolverine was a self-contained story that didn’t overly rely upon the fan-service style references and cameos that usually make up a superhero movie.  It represents  that after ten years these movies have to aspire to something little more and sample-in things from other genres, like The Wolverine does with samurai movies.  Dr. Klock agreed that this was good, and seems to have worked for the buddy comedy component in Iron Man 3, the straight up space dildos and all sci-fi of Man of Steel, and the super dirty street-level thing that Kick-Ass 2 is doing.   However, Dr. Klock was torn between respecting the possibly good lack of fan service “fuck yeah” moments – like Wolverine’s cameo in X-Men: First Class and Hulk smashing Loki in Marvel’s The Avengers –in The Wolverine and wanting more of them.  The only ones, he said of his screening, came during the post-credits scene.  All present wondered if this bespoke a dilution or evolution of what super hero movies are for, but no resolution was reached.

There being no further business, the meeting was adjourned.  Immediately afterward, both Dr. Klock and Mr. Montgomery ascended into the White Hot Room.

Geoff Klock is a goddamned genius and a fun person to talk to about comics and genre stuff.  You can follow him on twitter here and should watch his Hamlet Mash-Up video here. “The Klock Minutes”  will hopefully be a regular feature on this site.