I really don’t want to be a hater two years in advance of the Batman vs. Superman movie — which we learned yesterday will be a courtroom drama called Batman v Superman: Dawn of Justice — but the “Sad Batman” meme that has emerged in wake of that first look at Ben Affleck as Batman has been pretty hilarious.

It began when director Zack Snyder tweeted this monochromatic photo of the new costume and Batmobile: 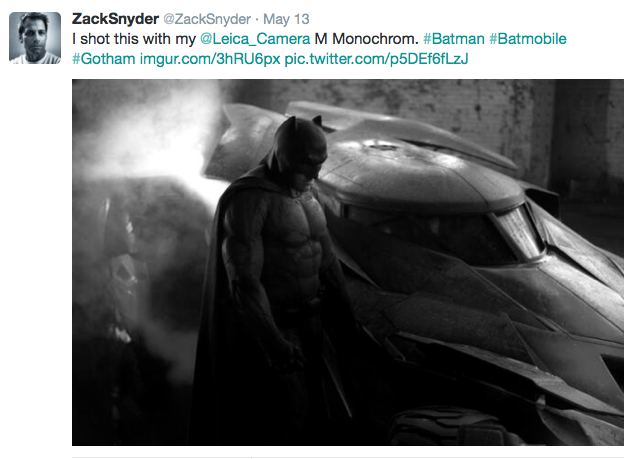 And continued with the following, because Internet: 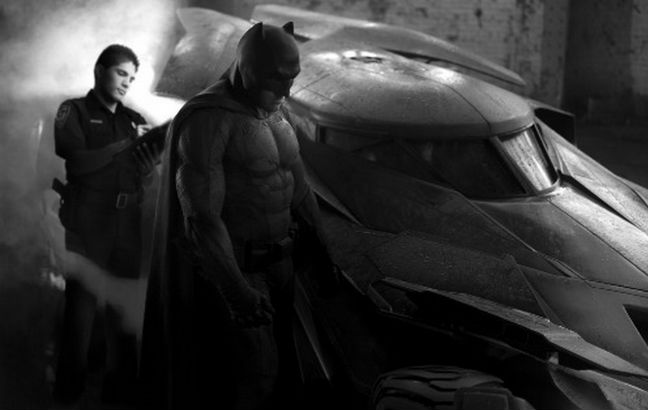 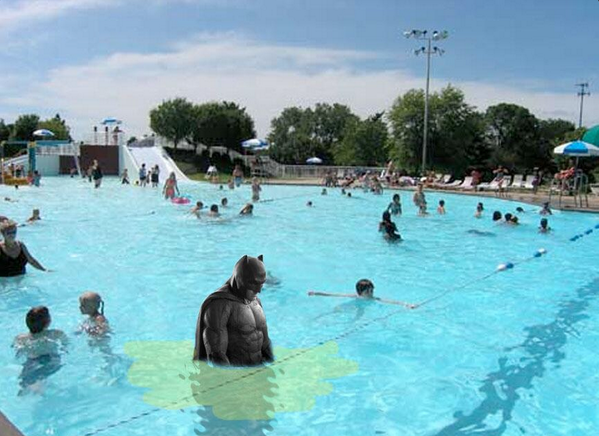 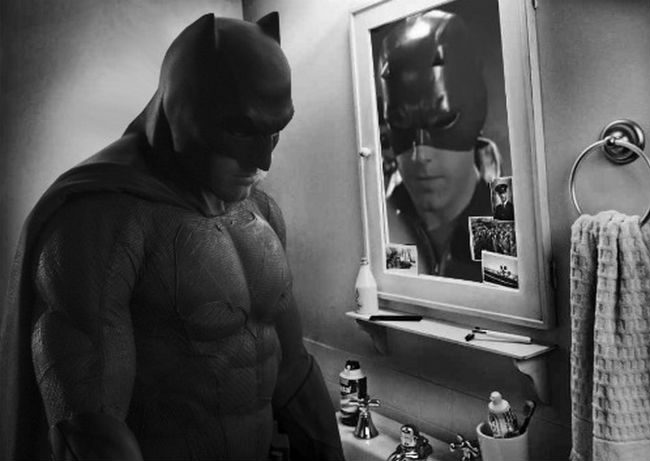 Again – I don’t want to pick on poor, sad old Batfleck too much, but like Homer Simpson says, these are funny because they’re true.

The people have raised up their voices with these delightful photo manips – we are tired of the one-note, depressive Batman we’ve been stuck with in the movies for the last 10 years or so. The Christopher Nolan Dark Knight movies certainly have their place in the comic movie pantheon, but the version of Batman that appears in them is totally wooden and uninteresting.  Christian Bale is a great actor, but he is only given two things to play as Batman: tortured brooding and raspy-voiced shouting. His Bruce Wayne doesn’t even want to be Batman, because it means he can’t have a girlfriend. Even though it’s just one photo, the image that Snyder tweeted seems to promise a doubling down on the perpetual moroseness, another long decade with a very, very Dark Knight.

Look, I’m conflicted. I actually LOVE what I can see of the costume in all it’s Frank Miller-ish glory. And I am in the internet minority because I actually don’t hate the idea of Ben Affleck as Batman. I mean, let’s be real: the sequel to Man of Steel has a lot more pressing baggage to deal with than the fact that Ben Affleck is playing Batman in it. Really I have a place in my heart for any version of Batman, so long as it comes with at least a shred of nuance. Even Frank Miller’s borderline sociopathic take on the character had a bit of a glint in his eye, a touch of self-awareness. In his own words, that version “loves being the goddamn Batman.”

They say the “golden age” of everything is 12 — when you are 12, that is. The reasoning goes that anything that you are into when you are 12 years old will be utterly infallible and impervious to criticism for the rest of your life. I was 12 in 1993, so it shouldn’t surprise you that my first Batman was Michael Keaton. What I love most about the version of Batman that appears in the 1989 Tim Burton film is that it deals with one of the more troubling aspects of Batman as a relatable character — his wealth — in a very compelling way.

I honestly believe the reason we see so many “sad” versions of Batman is because writers are desperate to connect audiences to him and they know that a person who is super rich and super happy about it is not someone a typical audience member can easily relate to. As Grant Morrison points out in his book Supergods, Bruce Wayne is a billionaire who dresses up in fetish gear and beats up poor criminals. There’s something a little messed up about that and I was happy to see it sort of addressed with all the crazy class warfare stuff that went down in The Dark Knight Rises. But the usual recourse is to make Batman sad. See? Money can’t buy happiness. Now we can kind of relate to him.

Before you say it – I know now as a proper comic aficionado that there are all kinds of canonical problems with the portrayal of Batman in the 1989 movie. He kills dudes. He shoots machine guns out of his car. I get it – that’s all just plain wrong for the character. And I also know as a guy who went to drama school and has studied screenwriting a little that there are a lot of things in that movie that would make Robert McKee shit a brick. I really don’t care. The law of twelves is totally true in this case, because Michael Keaton is still my goddamn Batman.

For me, the crucial line in the film that sums up the Tim Burton/Michael Keaton take on the character comes when Arliss and Vicki Vale are looking at the collection of ancient armors in Wayne Manor. It’s kind of a throwaway line at the end of the scene. Arliss says to Vicki Vale, “The rich… you know why they’re so odd? Because they can afford to be.”

According to Tim Burton, Bruce Wayne is simply a wealthy guy with a very peculiar eccentricity. This feels more authentic than the honor-bound head-case of the Nolan Dark Knight Movies. Real-life billionaires often have their obsessions and throw their resources at them in bizarre ways – former New York City Mayor Michael Bloomberg is obsessed with health so he tried to outlaw big sodas in stores and baby formula in hospitals; media mogul Ted Turner is obsessed with environmental preservation and nuclear disarmament so he created a cartoon to educate kids about those things. For this version of Bruce Wayne, the crime in Gotham City is his personal obsession so dresses up like a bat to take care of it.

Charmingly, Keaton’s Wayne is also portrayed as kind of a scatterbrain. Like real billionaires he is focused on his main thing and has outsourced the other little details of his life to his staff. He frequently needs Alfred to tell him which way something is in his house, he doesn’t even REMEMBER certain rooms of his house, and he is pretty clueless about his schedule. He tells Vicki Vale that he couldn’t find his socks without Alfred and you get the sense that he’s not joking. You can’t make the argument that Keaton’s Wayne is putting up a foppish front like Christian Bale’s Wayne, because Keaton’s Wayne does this sort of stuff when he and Alfred are alone. His obliviousness in his Bruce Wayne identity feels genuine – and again, authentic – he’s good at being Batman and hopeless at everything else.

Later in the movie when Keaton’s Batman is directly confronted with the murderer of his parents, he doesn’t brood or curse his fate all that much. He is not consumed by the murder of his parents in the way that Christian Bale’s Batman is – remember the Bale version of Bruce Wayne originally planned to murder his parents’ killer in broad daylight and when you think about it he only became Batman because someone else beat him to it. On balance, Keaton’s Batman is an adjusted guy. Being Batman isn’t an insatiable quest for justice; it’s the job he set out to do. Throughout the movie, Wayne equates being Batman to having a job. When he tries to explain his identity to Vicki Vale, the analogy he uses is the way people are different at work than they are at home. When he tells Vicki “I’ve got to go to work” it plays as a badass line, but really he means just that. Time to punch the clock.

I know a lot of people hate the scene where Alfred lets Vicki Vale into the Batcave – because, come on dude YOU HAD ONE JOB – but I actually love what Bruce has to say in it:

When asked why he’s doing the whole Batman thing, he says “Because nobody else can.”

By which he means, nobody else has the resources to pull something like this off. He sees his being Batman as a kind of social obligation, a democrat’s wet dream of a rich guy stepping up and doing a little extra to make sure less fortunate people are safe. It’s a magnificent line that reclaims a little dignity from the borderline psychotic vigilante version envisioned by Frank Miller. Also absent is the know-it-all three-steps-ahead-of-everything aspect of the character that has become fairly standard. It’s not like he’s got everything that comes with being Batman figured out.

“Sometimes I don’t know what to make of all this,” he tells Vicki. To Keaton’s Wayne, being Batman is simply the only reasonable course of action given the environment he lives in. When Vicki says that he’s “not exactly normal,” he has a very reasonable response: “It’s not exactly a normal world, is it?

Anyway – this ended up being a longer rant than I intended, but in summary: I’ll take it an abnormal eccentric “Come on! Let’s get nuts!” Batman over a sad one any day.

One thought on “WHY SO SAD, BATMAN?”