Say what you will about all the abs on the CW’s Arrow – that show knows what the hell it’s doing.

I used to think that you could get away with doing edgier stuff with the character Green Arrow because he was but a minor player in the DC Comics pantheon. Anyway, that’s what Denny O’Neil and Neil Adams always said when asked about all the socio-political stuff they put in the Green Arrow comic back in the seventies: essentially nobody was looking at first so they could afford to take risks. Because they were willing to take those risks, everybody started looking.  I see now that it has nothing to do with Green Arrow being a “lesser” character, because apparently DC comics is willing to take crazy risks with even their main characters with varying results.

Many will no doubt shirk Arrow off as an afterthought or unofficial continuation of Smallville, but it’s an unfair comparison. Smallville was ultimately a terrible series, sunk by its angsty nonsense and its lazy teenybopper reimagining of the Superman/DC Comics lore. (In fairness, the angsty nonsense could be fun sometimes too – I’m thinking of the morose Doomsday carrying Chloe in his arms while an of-the-moment pop song played.)

I’m just going on the first couple of episodes here, but what’s good about Arrow, is simply that it is a sharply defined and well-structured series. And it ought to be – it swiped its format and setup from two very good templates and then inverted them to serve its own purposes.

WHATEVER HAPPENED TO ARROW, HAPPENED

In the pilot episode we see shipwrecked billionaire playboy Oliver Queen, bearded and bedraggled, being rescued after five years of surviving on a desert island.  The first episode covers his return home and the development of his Arrow vigilante persona. At his first dinner back with his family, his close friend, Tommy Merlyn, says something like “Let’s see what else did you miss? Oh, right: Lost. It turns out they were all dead or something.”

Remember when we all cared about how Lost was going to end? I love a good “end of Lost” gag probably more than anyone – for better or worse a throwaway line about it in my play, Triumph of the Underdog, will be associated with me for all eternity in the paper of record – but this mention on Arrow is more a parenthetical citation than a joke. That’s because Arrow has essentially inverted Lost’s format. On Lost, we’d see flashbacks that informed how the characters behaved while they were stranded on the island. On Arrow, we see frequent flashbacks of how Ollie’s time stranded on island taught him the parkour and arrow shooting that he would later need in his super hero career.

Often it goes farther than just learning combat or survival skills.  In the third episode, Arrow is tagged by a poisoned bullet.  We see him quickly mash-up some herbs and drink them before he passes out.  From there we see a flashback to Ollie being given those same herbs on the island by another castaway of Chinese descent. As with the best Lost flashbacks, we first think that we’re merely seeing the protagonist learn a trick that will be useful in the present. Yet as the flashbacks continue throughout the episode, we eventually see that Ollie’s interactions with this Chinese castaway taught him the importance of relying on other people. And sure enough, at the end of the episode’s main story, he reveals his identity to his bodyguard, Dig.  And just in case the appropriation of elements from Lost wasn’t overt enough for you, in the fifth episode it’s even revealed that the island’s name is the Chinese word for “purgatory.”

Alright – so maybe it’s a little artistically bankrupt to so blatantly siphon gas out of the tank of such a high-profile show, but it’s certainly good business. To make Arrow worthwhile for DC, Warner Brothers, and CW it simply had to hit more viewer quadrants than the ardent fanboys who watched Smallville for a DECADE. Stealing a few un-copyrightable elements from one of the most popular shows in TV history will certainly help get you there.

I have to say that I appreciate the brazenness of the rip-off, though I have it on good authority that the flashbacks are handled less gracefully further into the series. Five episodes in, we have still yet to see the island flashback where Arrow learns the advanced chemistry, advanced computer skills, ballistics, and forensics he uses in every episode, but I’m sure it will come.

I HAVE SHOT MY ARROW O’ER THE HOUSE

At another point in the third episode, Ollie takes an assassin’s computer to a young woman in Queen Industries IT department in hopes that she can recover some information from it.  When it is revealed that the computer belongs to a guy who works for a business rival of Ollie’s new stepfather, Walter Steele, who has taken over Ollie’s father’s company, the IT lady reveals the other unexpected source material for Arrow:  “Look, I don’t want to get involved in some Shakespearean family thing.”

Yet this is precisely what Ollie is involved in, because the premise of Arrow borrows more than a little from the family dynamics of Hamlet and, again, upends them.  In the first episode, we see a flashback of Ollie and his businessman father on a life-raft immediately after the boat crash that we know will strand Ollie on the island. Ollie and Mr. Queen are on the raft with a third guy, but there is only enough food for one person. “Survive,” Mr. Queen says Ollie. He confesses to his son that he has led an amoral life and that he has helped to corrupt their city. He gives Ollie a list of names and charges him with getting back to Starling City to clean up his mess.  Then Ollie’s dad pulls a gun and kills the third guy on the raft followed by himself. 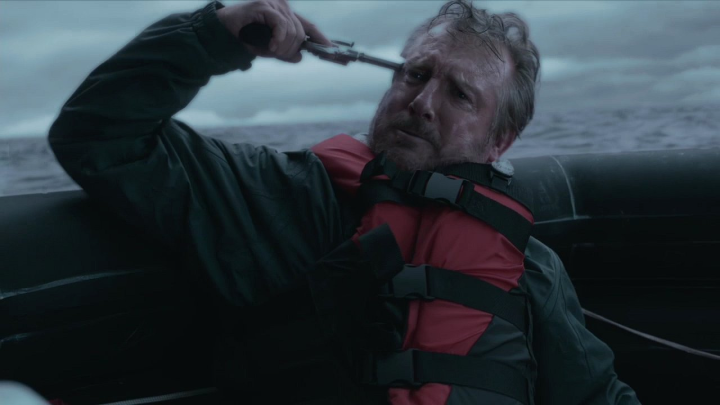 It’s another cunning transposition, this time of the scene between Hamlet and the ghost of his father. Hamlet’s father asks Hamlet to avenge his “most foul” death; Ollie’s father essentially asks Ollie to avenge his regrettably mislead life. Like Hamlet, Arrow will struggle with the practicalities and execution of his father’s final request.

Five years later, Ollie returns from the island to find his mother, Moira, married to his father’s former business partner, who has taken over the family company. And from there the Hamlet allusions are taken to almost laughable extremes.  Ollie’s sister Thea – nicknamed “Speedy” after Green Arrow’s comic sidekick – is a drug-addled basket case not unlike Ophelia.

But Ollie has another Ophelia, Dinah Laurel Lance (who comic aficionados know as the Black Canary) whose detective father, like Polonius, is a minor antagonist for Arrow. At first I thought party guy Tommy Merlyn was supposed to be our Horatio, but it turns out he is both Rosencranz and Guildenstern – he was initially sent for by Ollie’s mother.  Ollie’s driver and bodyguard, Dig, who is privy to both sides of Ollie’s life is the real Horatio.

One more clever inversion on the Hamlet stuff: in the early episodes it seems very much like Ollie’s mother Moira – the Gertrude analogue – is the main antagonist and not his stepfather Walter.  Again, I’m very early in the series so I’m sure there’s a lot left to play out there.

On balance the formula works:  Arrow gets to appease the Smallville fanboys by playing in the DC toy box with characters like Deadshot, Deathstroke, and Huntress.  But the series also hedges its bets by hewing closely to a tried and true TV convention and cribbing some high-brow domestic conflict from western literature’s original purveyor of fun angsty nonsense.

Did I mention the abs?

2 thoughts on “OF SLINGS, ARROWS, AND DESERT ISLANDS: THE INVERTED SOURCES OF THE CW’S ARROW”