“The politics in academia are particularly fierce because the stakes are so low.”

When monologist Mike Daisey attributes the quote above to Mark Twain in Part 24 of his 29-night cycle, All the Faces of the Moon, he jokes that really all quotes are attributable to Mark Twain in one way or another.  And while many of the discussions in this episode about chance, fate, and unseen enemies could be called academic, Daisey certainly succeeds in keeping the stakes up.

I will have less to say about this episode than perhaps any other.  This is because with the exception of the prologue, where Daisey’s playwright friend Sheila shows up in Nevada to recruit a bar manger named John and take on the Gebbeth, this installment serves as a much needed recap and respite with regards to the action in the last couple of episodes.  Every action movie – and on some level every other kind of movie or play – needs a scene where the main characters regroup one last time before splitting up to take care of their own individual tasks during the final action.  It’s also a last chance to air any grievances.  In a cop movie this is the scene where the rankled police chief makes it clear that after this mission our hero, who has broken many rules along the way, will have his badge taken away and he will be off the force.  This scene has become kind of a cliché, but it serves an important purpose.  The audience needs to be reminded of those high stakes – we need to be clear on the fact that the hero is going into a totally hopeless situation and that he (or she) now has nothing to lose.

Clichés notwithstanding, Daisey puts a fun spin on this scenario.  After all, when it comes time for a magician like Daisey to have his “badge” revoked, no one less than the three Fates of myth – the ones who weave and cut the threads of life itself – could do it.  And when an errant performer needs to be taken to task, that duty falls to the production stage manager.  As always, Daisey amusingly blends these theatrical and mystic archetypes.  He, his wife Jean-Michele, Dionysus’ son Jack, and Elaine the Grey Lady find themselves confronted with Fate in the form of a tribunal of detached stage mangers in the empty Public Theater.  It’s an immensely clever idea that makes what amounts to an episode’s worth of exposition go down much smoother.

At the end of the last episode, Daisey purposely stepped on a pocket watch and released Nikola Tesla from the “pocket” steampunk universe he was imprisoned in.  Daisey did so to cover his escape from the Small Man – a faceless New York bureaucrat who has been running New York for decades.  The Fates are here to let Daisey know that the releasing of Tesla will not go unpunished.  After, that is, Daisey saves everybody from the end of the world, if such a feat is even possible.  Jack reminds Daisey that he will also have to make good on his Mexican wrestling challenge with the Small Man, and that most likely Daisey will not win that match.  Like I said, both Daisey the storyteller and Daisey the character have come to the end of the line here, and it’s going to have to be an all or nothing thing.

Following the encounter with the Fates, Daisey and co. channel the spirit of Joseph Papp, founder of the Public Theater, by pouring some brandy into a coffee cup.  Daisey asks if Papp can track down some one in Death’s “organization” to try to learn what that pesky mark he received in the first episode means.  In the meantime, Papp gives Daisey a little advice – an interesting conceit when remember that this is Daisey reflecting about himself via his interpretation of a titan of New York theater in the 20th century.  In a way, this is Daisey grappling with his place with the larger legacy of the American Theater.  Papp says to Daisey:

Papp goes on to say that he himself produced tons of shows and a lot of them were terrible.  When you have a terrible show, Papp says, you’ve got to move on.  In this narrative, Daisey has struggled with depression that results from the cross pollination of his art and his life, the places where history and reality meet.  “You fucked up,” Papp says, undoubtedly a reference to The Agony and the Ecstasy of Steve Jobs.  “Now you’ve got to move on.”

As a final stinger, Papp reveals the historical identity of the Small Man – Robert Moses, who according to Wikipedia exerted much influence in New York City throughout the 20th century.  I know next to nothing about him so I am looking forward to a patented Daisey overview on this guy next episode.

By chance I am working on another project that has to do with the 1964 World’s Fair – an event that Moses was heavily involved in.  Looking through the souvenir brochure last night, I found this downright bizarre introduction: 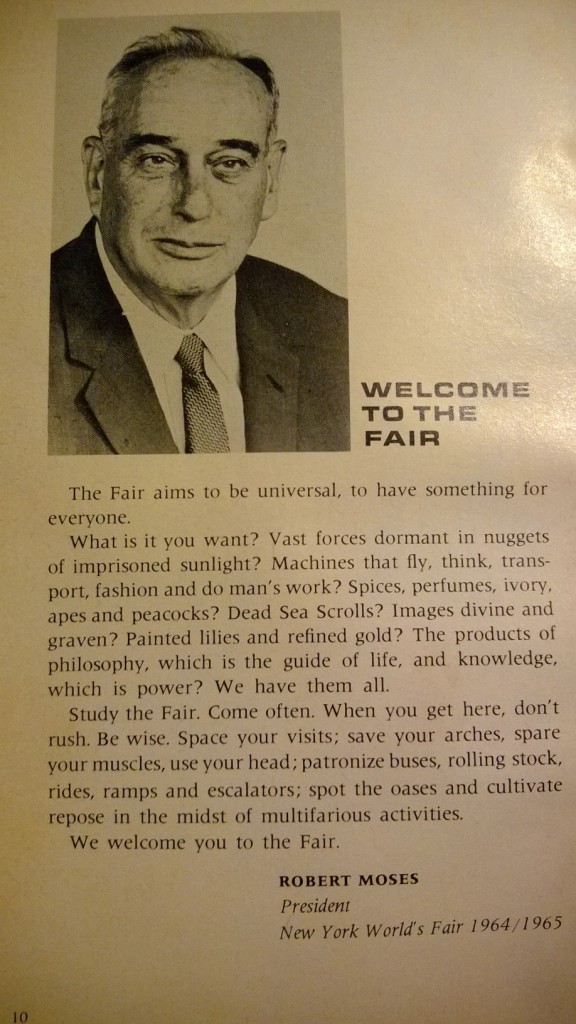